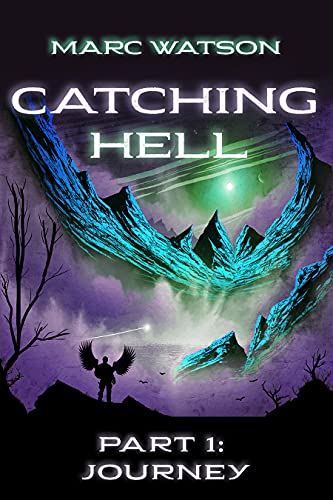 In the distant future, two young men are thrust into unknown worlds—worlds they were raised to fear.

Aryu, the Boy with Wings, enters a realm where magic rules. Guided by the conflicted phoenix Nixon Ash, a creature sent to kill him, Aryu must confront the powerful, immortal Embracers and the balance of Everything and Nothing they inhabit. Meanwhile, Johan navigates a futuristic world, seeking a means to defeat the robotic Army of the Old destructively marching across their homeland, and reunite with his best friend.

From Marc Watson, author of Death Dresses Poorly, comes the first part of the epic science-fantasy duology in the world of Ryuujin. Join Aryu and Johan as they face their fears while uncovering new ones—all in the name of revenge.

Marc Watson is an author of genre fiction of all lengths and styles. He began writing at the age of 15 and continues to be a part-time writing student at Athabasca University. He has been published on flash fiction site www.101words.org (find his stories here) as well as comedy site www.thecorrectness.com.

Marc lives in Calgary, Alberta. He is a husband and proud father of two. He is an avid outdoors-man, martial artist, baseball player, and lover of all Mexican foods.  He can be found at online www.marcwatson.ca, as well as on Facebook at www.facebook.com/marcwroteabook, and on twitter at @writewatson.

READ ABOUT HIS ANTHOLOGY HERE