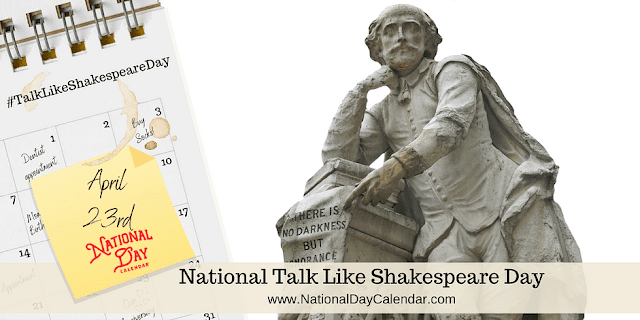 National Talk Like Shakespeare Day occurs on William Shakespeare's birthday, April 23.  This is the day most commonly celebrated as his birth (1564) and, ironically, noted as the date of his death in 1616.  Though it is more widely known that he lived during the Elizabethan Era (1558 to 1603), Shakespeare, also, saw much of the Jacobean Era (1603 to 1625). According to Shakespeare-online.com: "Shakespeare used a metrical pattern consisting of lines of unrhymed iambic pentameter, called blank verse. His plays were composed using blank verse, although there are passages in all the plays that deviate from the norm and are composed of other forms of poetry and/or simple prose."  They, also, state that his language is Early Modern English.  You can learn more about writers from the Early Modern English Period HERE.

Here are some great books in Early Modern English as well as some Shakespeare classics: