MAY Is About The Military

May is a time to celebrate our military - those who are commissioned, enlisted, and civil support.  It was selected to be National Military Appreciation Month by congress in 1999 because there are so many observances that happen in May regarding the military.  These include:

MAY 29 - International Day of UN Peacekeepers

Last Monday in May - Memorial Day

There are many things I'd love to say about sacrifice and service.  The emotions that well up inside me...  The honor I feel to be counted among those who serve... Sometimes, even as a writer, it is hard to put into words.

I was taught it was honorable to serve your country... unless you were female.  Clearly, I didn't buy into that bullshit.  I believe we ALL have a duty to serve in whatever why we are fit in doing so.  For me, I was a nursing assistant, a soldier, a mother, and a friend.  Whatever hat I wore, it sat on a loyal and hardworking head.

Civil servants, such as the police, EMS, firefighters, and medical staff, are just as vital to the mission as any soldier.  Just as the civilian staffing and family members are.  Each of us plays a part to ensure peace and prosperity.  After all, that is the real goal.  True power isn't about being a strong enough force to bullying your way around.  It's about being strong enough together that you can weather anything for the sake of good, right, and the welfare of the people and planet. 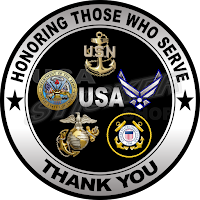 Email ThisBlogThis!Share to TwitterShare to FacebookShare to Pinterest
Labels: #HolidayRelated