If you are a sci-fi lover, then you might want to check out Sean Robins' The Crimson Deathbringer Trilogy. 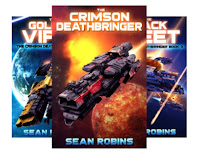 When Earth gets embroiled in the middle of an intergalactic war, humanity's only hope for survival rests with a rag-tag team of unlikely heroes which includes an ace fighter pilot, a stuntwoman, a super-assassin, and an alien prankster.

Jim, a wise-cracking, OCD-suffering fighter pilot, is about to propose to his girlfriend when his friend Kurt surprises them by showing up at his house, wounded and covered in blood. This is just the beginning of Jim's woes because soon after his life is thrown into a galactic conflict that threatens the very existence of the human race.

Can our heroes save humanity from the wrath of a galaxy-conquering alien fleet?

Will the galaxy survive?

The Xortaags are back with a vengeance. Not being the forgive-and-forget types, they’ve conquered the Akakie homeworld, and now they set their sight upon Earth. Having reverse-engineered the advanced technology they scavenged on Kanoor, they now hold the key to rule the universe forever. It now befalls to Jim and his friends to save not only humanity, but every sentient species in the galaxy.

To make matters worse, an even more sinister threat is looming in the darkness. Unknown to our heroes, a time-travelling alien fleet is on its way to our neck of the galactic woods.

You thought the stakes were high during the first human-Akakie-Xortaag intergalactic war? You ain’t seen nothing yet!

Just when you thought things couldn’t get any deadlier, a massive fleet arrives from the future!

Thanks to Jim and his allies’ efforts, there’s finally peace in the galaxy … but all good things must come to an end.

The Black Fleet, hellbent on revenge, will indiscriminately ravage every planet on its way to Earth. This is the very definition of an extinction-level event, and nobody seems to able to stop the enemy ships in their tracks. To make matters worse, the Akakies are willing to sacrifice Earth to save their own species.

Having defied the odds a few times already, it again falls onto Jim and his friends to save the day, but can he counter such a universe-ending threat? And if he does, at what cost?