CAN’T RIDE AROUND IT!

Book 3 of the Deadwood Undertaker Series 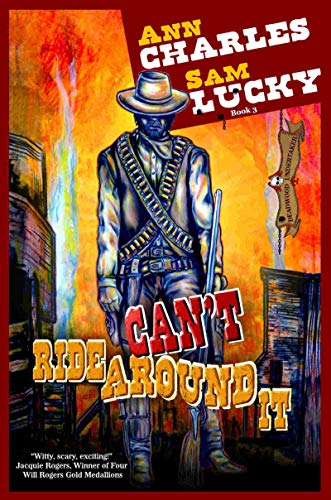 Some things you just can't ride around ...

Jack “Rabbit” Fields knew a good thing when he saw it, whether it was a sound horse, a sure bet, or a pretty sage hen. When it came to locking horns with any curly wolves he ran into along the trail, he tended to shoot first—a notion that had saved his hide more times than he could count. But that was before he came to Deadwood.

Now, someone is stealing freshly dead bodies right out of their graves, and Rabbit and his amigos are on the hunt to figure out who. And more important, why?

Unfortunately, finding the answers to those questions will take plenty of Rabbit’s bullets, and maybe his blood, too. When the shooting stops and the smoke clears, he reckons there will be a whole lot more cold corpses in the Black Hills.

Hold onto your hats and saddle up for another action-filled adventure with the Santa Fe Sidewinders, Clementine, Hank, and the rest of the goldurn Deadwood devils! 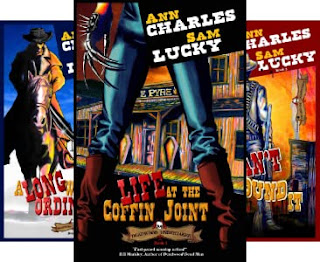 Junction Mystery Series, Dig Site Mystery Series, Deadwood Undertaker Series (with her husband, Sam Lucky), and AC Silly Circus Mystery Series. Her Deadwood Mystery Series has won multiple national awards, including the Daphne du Maurier for Excellence in Mystery/Suspense. Ann has a B.A. in English with an emphasis on creative writing from the University of Washington and is a member of Sisters in Crime and Western Writers of America. She is currently toiling away on her next book, wishing she was on a Mexican beach with an ice-cold Corona in one hand and a book in the other. When she is not dabbling in fiction, she is arm wrestling with her two kids, attempting to seduce her husband, and arguing with her sassy cats.

Sam Lucky likes to build things—from Jeep engines to Old West buildings to fun stories. When he is not writing, feeding his kids, attempting to seduce his wife, or attending the goldurn cats, he is planning food-based book signing/road trips with his wife and working on one of his many home-improvement projects.