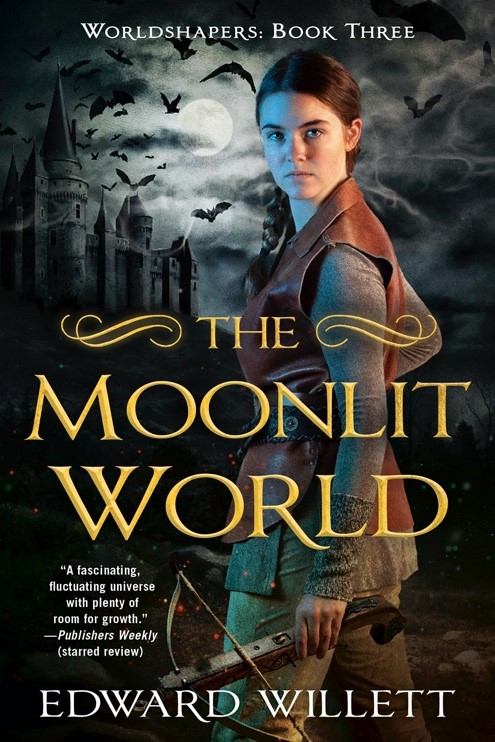 The first book in the series, Worldshaper, received a starred review in Publishers Weekly and was long-listed for Canada’s prestigious Sunburst Award; Book 2, Master of the World, which just came out in mass-market paperback (it’s also available as a trade paperback, audiobook, or e-book), was also long-listed for the Sunburst Award and short-listed for the Muslims for Peace and Justice Fiction Award at the 2020 Saskatchewan Book Awards.

In The Moonlit World, fresh from their adventures in Master of the World in a world inspired by Jules Verne, Shawna Keys and Karl Yatsar find themselves in a world that mirrors much darker tales. Beneath a full moon that hangs motionless in the sky, they’re forced to flee terrifying creatures that can only be vampires…only to run straight into a pack of werewolves.

As the lycanthropes and undead battle, Karl is spirited away to the castle of the vampire queen. Meanwhile, Shawna finds short-lived refuge in a fortified village, where she learns that something has gone horribly wrong with the world in which she finds herself. Once, werewolves, vampires, and humans lived there harmoniously. Now every group is set against every other, and entire villages are being mysteriously emptied of people.

Somehow, Karl and Shawna must reunite, discover the mysteries of the Shaping of this strange world, and escape it for the next, without being sucked dry, devoured, or—worst of all—turned into creatures of the night themselves.