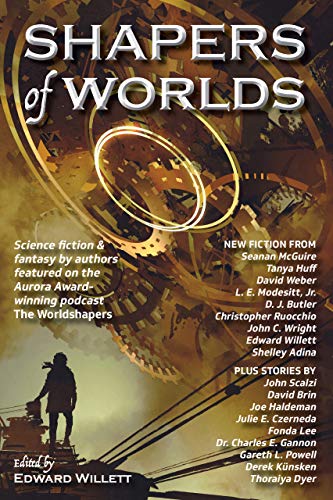 Releasing September 22 in e-book and November 14 in print from Regina’s Shadowpaw Press, Shapers of Worlds is an anthology featuring stories by internationally bestselling and award-winning authors of science fiction and fantasy.

All of the featured authors were guests during the first year of Willett’s podcast, The Worldshapers, winner of the 2019 Aurora Award (Canada’s top award for science fiction and fantasy) for Best Fan Related Work.

Among the collected authors are winners of and nominees for most of the world’s most prestigious awards for science fiction and fantasy literature: the Hugo, Nebula, World Fantasy, Aurora, Sunburst, Aurealis, Ditmar, British Science Fiction Association, and Dragon Awards.

Ranging from boisterous to bleak, from humorous to harrowing, from action-filled to quiet and meditative; taking place in alternate pasts, the present day, the far, far future, and times that never were; set on Earth, in the far reaches of space, in fantasy worlds, and in metaphysical realms, each of these stories is as unique as its creator.

Willett is himself an award-winning author of more than sixty books of fantasy, science fiction, and non-fiction for readers of all ages. His latest is The Moonlit World, his 11th novel for New York’s DAW Books, Book 3 in his Worldshapers series. In The Worldshapers podcast, Willett, a former newspaper reporter and editor and radio and television host, chats with other science fiction or fantasy authors about their creative process.

Shapers of Worlds was successfully Kickstarted earlier this year, raising $15,700 from more than 330 backers. The anthology will be available through all major retailers. The e-book can be pre-ordered now.