AND THE LAST TRUMP SHALL SOUND - A Future History of America

AND THE LAST TRUMP SHALL SOUND
A Future History of America

“In a moment, in the twinkling of an eye, at the last trump: for the trumpet shall sound, and the dead shall be raised incorruptible, and we shall be changed.” 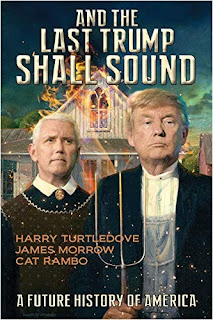 And the Last Trump Shall Sound is a prophetic warning about where we, as a nation, may be headed. Mike Pence is President of the United States after years of divisive, dogmatic control by Donald Trump. The country is in turmoil as the Republicans have strengthened their stronghold on Congress, increasing their dominance. And with the support of the Supreme Court, more conservative than ever, State governments become more marginalized by the authoritarian rule of the Federal government.

There are those who cannot abide by what they view as a betrayal of the nation’s founding principles. Once united communities break down and the unthinkable suddenly becomes the only possible solution: the end of the Union.

The authors’ depiction of a country that is both unfamiliar and yet unnervingly all too realistic, make you realize the frightening possible consequences of our increased polarization—a dire warning to all of us of where we may be headed unless we can learn to come together again.

Dubbed as “The Master of Alternate History” by Publishers Weekly, Harry Turtledove has written a number of classic bestsellers in the subgenre, including How Few Remain, The Guns of the South and The Man with the Iron Heart.

He uses his study of history (with a Ph.D in Byzantine history) to create alternate worlds in intricate detail, crafting enthralling adventures that have garnered him high critical praise as well as making him one of the most successful bestselling authors in alternate history.

Turtledove has won, or been nominated, for nearly every major award in science fiction (multiple times, for many) including the Hugo, Nebula, Sidewise (alternate history), Homer (short stories), The John Esten Cooke Award for Southern Fiction and the Prometheus Award. Many consider him to be one of the most distinguished authors of alternate history to have ever written in that sub-genre―he is certainly one of the most critically acclaimed.

Harry Turtledove is married to novelist Laura Frankos. They have three daughters, Alison, Rachel and Rebecca.

Cat Rambo is a prolific science fiction and fantasy writer of short stories. Her two hundred plus stories have appeared in many anthologies and magazines including Asimov’s, Clarkesworld, and Tor.com.

She is a Nebula Award winner and has been nominated for the World Fantasy Award, and been a finalist for the Million Writers and the Compton Crook Awards, as well as been on the Locus Recommended Reading List.

Cat was the co-editor of Fantasy Magazine from 2007 to 2011 and is a past President (two terms) of the Science Fiction and Fantasy Writers of America (SFWA). She lives and teaches in the Pacific Northwest.