DID YOU KNOW Bob Brown?

Godfather of the E-Reader 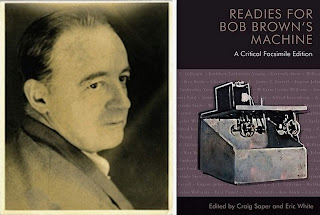 Robert "Bob" Carlton Brown, II (June 14, 1886 – August 7, 1959)
An American writer and publisher
Bob Brown wrote a manifesto called 'The Readies' in the 1930s that described the modern-day eReader.  His original machine used microfilm ribbon that could be adjusted as it scrolled over magnifying glass.  However, it took a while for technology to catch up to his vision.  The first commercial (hand-held) eReader wasn't realized with the Rocket ebook in late 1998.  This led to further innovations, including the Amazon Kindle in 2007.
#DidYouKnow is a Blog Series on www.jmnorthup.com and www.nornstriad.com
Posted by J.M. Northup at 4:11 PM