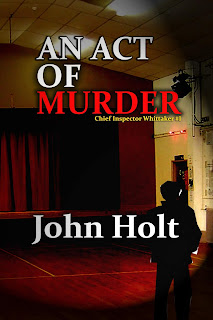 1)  Tell us about your work-in-progress, or WIP, as it’s known as in the industry or New Release…
My latest novel, “The Art of Murder” has just been made available as an ebook, and should be available as a paperback within the next few weeks. It is the eighth novel to feature private detective Tom Kendall. When two valuable oil paintings are discovered to be missing, presumed stolen, Kendall is asked to investigate on behalf of the Insurance Company. His task is to recover the paintings, or apprehend the person who took them. Reluctantly he accepts the job. Then the body of an art collector is discovered, and then another, the body of an employee of the gallery where the missing paintings belonged. “So what do you think?” asked Mollie, Kendall’s business partner. “What do I think?” Kendall repeated. “Well with two people dead, I think someone has been practicing the art of murder.”
The novel “The Art of Murder” is available on Amazon.
My current WIP is entitled “An Act Of Murder”. A small local amateur dramatic group are performing a murder mystery play, ‘Murder At Larkhall Manor’, at a local village hall. During the performance a murder takes place, witnessed by 123 people in the audience. An open and shut case? Chief Inspector William Whittaker, of Scotland Yard, doesn’t think so.
The current work in progress, “An Act of Murder”, features a Scotland Yard detective, who first made an appearance in “A Killing In The City”, a crime novel featuring Kendall, on vacation in London. It is very early days yet with this project, and I would not expect anything being ready until the new year. So keep your eyes open.
As a taster – “The stage was in semi darkness, and there was complete silence, except for the ticking of a clock. Jean looked over to the far side of the stage. Young Timothy Saunders was waiting for his cue. He saw Jean looking at him, and he gave a nervous wave. She waved back. The clock on the mantle shelf started to chime the hour. A wind began to blow, rustling the curtains at the window. Right on time, a gun barrel could be seen poking through those curtains. The curtains slowly opened, and Tim walked on to the stage. He glanced around, and continued on until he reached the centre of the stage. He glanced around once more. Then he looked down at the figure lying asleep. He pointed the gun directly at the Colonel, and gently, slowly, squeezed the trigger. There was a loud thud. The Curtains came down indicating the end of Act Two.”

2) What inspired this tale?
I have now written 8 novels featuring my private detective Kendall; and three novellas featuring private detective Jack Daniels. The more I write the harder it is becoming to dream up a decent original plot. Not only do I have to dream up a crime, but I also need to show a motive, and who did it. Furthermore I have to come up with the clues necessary for Kendall, or whoever, to solve the crime. Some of the stories come about almost by accident. Sometimes an idea comes to mind. I start writing not really knowing where it will lead. The idea of a murder being committed in front of so many witnesses came to me one evening. So that’s the crime sorted, and I know who did it. I have an idea about motive, but how Inspector Whittaker will solve the case is, at present, a bit of a mystery.
But if any one has any ideas for a future crime investigation I would appreciate to hear about it. The best suggestion will receive one of my paperbacks.
Normally, I don’t feel the need for much research. After all I’m writing fiction stories, everything – places, names, events – are all made up. So generally, research isn’t that essential. Having said that, my novel “Diagnosis Murder” is loosely based on true events that happened in Florida and Georgia, during the first six months of 2016. At that time several doctors (over fifty) disappeared, and were later found dead. Some of the deaths were judged to be accidental. Others were considered to be suicides. Many, however, were far more sinister. In other words, they were murders. All of the doctors had a few things in common. They were all oncologists dealing with child cancers; they all practiced alternative therapies; and they were all highly critical of the pharmaceutical companies.

3) Do you relate to your character?
Kendall and I have a great deal in common. He is stubborn, once he gets an idea in his head you can’t shift it. I’m not quite as stubborn, but I do like to get things straight, and I won’t let things go if I think I’m right. Kendall is laid back, easy going. Same here I guess. The main thing that is common to both of us, is we both have a sense of humour.
Kendall came about through necessity. My first crime novel was based on political corruption. About a third of the way through the story there was a murder, the first, with more to come. It had to be investigated but the local police chief was part of the on-going corruption. So I really couldn’t use him could I? I needed a private detective, hence Kendall came along. That was in 2011, and he hasn’t gone away since. So far he has appeared in eight novels.
Posted by J.M. Northup at 11:53 AM