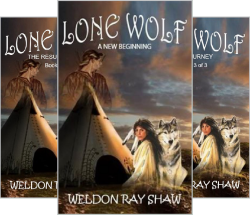 1)    What is the title of your book?
Lone Wolf (Historical Romance) 3 novel series
1.                   A New Beginning - LINK
2.                   The resurrection - LINK
3.                   The Journey - LINK
Ø  What is the story about?
·        Lone Wolf is a book for those who believe in true love and sacrifice for that one particular person they love. To love someone so much you are willing to die for them to ensure their safety. Lone Wolf unfolds in the rough time of the 1860s, in the wilderness of Montana, which had not been tamed as of yet. It was a time when people's lives were lived in the harshest elements and death was a reality.
·        The story unfolds telling how Britt McCormick, who was sixteen at the time, was found stranded, lonely and helpless by the Cheyenne Indians, who took him in after his family had died. Chief Running Fox, found Britt to be a fascinating child and gave him the name of Lone Wolf. Running Fox saw a spirit in Lone Wolf's eyes, unlike any he had ever seen before. He knew this child possessed strong medicine inside him and was destined for great things.
·        Because of this, he brought Lone Wolf home to his daughter Fawn to take care of and teach. Fawn, which was only eighteen at the time, and recently widowed herself, was very displeased with her father for dropping this white man off on her. She had always been taught to hate the white man, and now her father is asking her to take care one.
·        However, as time went on, she grew very close to Lone Wolf, and he filled a void in her heart which had been empty for some time. Lone Wolf is a book about love. It tells the story of how love can break down all fear, especially when the one you love is in trouble. It shows the sacrifices one may have to make to keep those close to your heart safe.
·       It also points out love is not something that is easily received, but instead something you must earn from another person. Lone Wolf proves people from different parts of the world and even customs can come together and be euphoric with each other.
·       The remarkable part of this novel is, it makes you realize you should never take what you have for granted because as fate has it, it might not be here tomorrow. Love is a very mysterious thing, but as Lone Wolf found out himself when you lose the one you love, that particular person who was the only reason you woke up each day, the void that person leaves in your heart will be so big it will seem impossible to fill.
Ø  Who is the main character?
·  Lone Wolf (Britt McCormick)/Fawn
2)   What inspired this tale?
Ø  How did the story come to you?
·   Wow! First off I want to say I love writing romance. Being I have Native American in me, I like to incorporate the Native culture into my stories whenever I am in a situation where I can do so.
·   The Lone Wolf novels were the first romance novels I released. The stories came so easy to write, and the characters just came alive for me as the story unfolded on paper. The character Lone Wolf was exceptionally easy to create because I brought him alive by stepping into his shoes. He talks, thinks and acts like me in many ways.
·  Here of late, I have written many novels in the western genre, but my heart feels at ease writing romance type stories. I do love to write stories set in the 1800s because I believe it was a more intriguing and straightforward period of our history.
Ø  Did you have to research for this novel, and if so, why?
·  Yes, I did do some research. When including Native American culture in your story it is essential to bring it alive for the reader by being as accurate about what you're describing. I also strive hard to make sure I describe the surroundings my story is unfolding in, such as the mountains, the trees, the proper type of trees for that area the story is taking place in. What type of plants, animals, and insects that there were in that region. My favorite author was Louis L'amour and what I learned from reading his novels was how to be descriptive and detailed.
·   I try hard to write in a simple manner because I believe it makes the storyfeel real life for the reader, but at the same time I get detailed in describing what I see, hear, smell and yes what the character is doing. All this adds up to one thing, and that is the reader quickly finds themselves becoming one of the characters of the story. In many of my reviews, the readers say the story hooked them to the point they could not put the book.
Ø  If you did research, what do you think surprised you most to learn, and why?
·  I am surprised every time I pick up a non-fiction book. It's a learning experience to read about things you usually don't think about.
3)   Do you relate to your character?
Ø  Is your protagonist anything like you, personally?
·  Yes.


ü   If yes, then how?
o   Lone Wolf was a caring character who believed women should always be respected as well as protected at all cost from harm. I guess that is just the old fashion upbringing in me
Ø  What made you write this character; were they based on a real person or something that inspired you?
ü   What should readers know about this character?
o   Lone Wolf was a strong character who was polite and had Fawns best interest in his heart at all times. He was loving, and he wanted nothing more than to earn her love and please her.
o   Fawn, was so beautiful on the outside but even better she was beautiful on the inside, and her character was that of a strong woman.
ü   Why is this character important to you?
o   I think in Lone Wolf's aspect I would like to tell the men chivalry, love, respect is a good thing in a relationship.
o   As it relates to Fawn, I guess I was expressing it was okay to be beautiful and strong.
Ø  Do you consider the main character of your story to be good or bad, and why?
·   Good.
Ø  What’s the objective of your character?
·  To earn his place within the Cheyenne village while protecting the one he loved (Fawn) and the other women of the tribe.
4)   Is there anything you specifically want readers to know about this piece of work?
Yes.
Ø  Is there a particular idea or morale you are trying to convey?
·  A I guess the moral of the Lone Wolf series is love is earned not just given.
ü   If yes, then why did you chose it?
o   I believe in some aspects life has gotten too busy for society. It seems like today there is not enough taught to children about respect for women and chivalry. To me, it seems we need to get back to some of the old fashion teachings about how two people should treat each other that are in a relationship.
5)   Is this novel a standalone?
No.
Ø  If it is a part of a series, what’s the series name?
·   LONE WOLF
Ø  If it is the first in a series, when can we expect to see the next book published?
·   Lone Wolf 3 was the last of the series. The three novel series is available on Amazon in Kindle and paperback.
Ø  If it is a part of a book series, can it be read as a standalone or do you need to read the entire series to experience the full realm of the tale?
·   You must read the novels in order. Each is a continuation of the previous story.
6)   Where can readers connect with you and purchase your book?
The readers can find all my novels and short stories at http://www.amazon.com/Weldon-R.-Shaw/e/B00VW8OSVQ
Posted by J.M. Northup at 11:49 AM