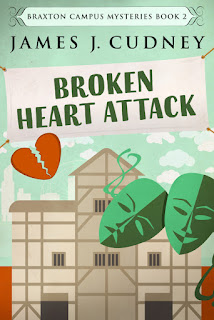 When an extra ticket becomes available to attend the dress rehearsal of Braxton's King Lear production, Kellan tags along with Nana D and her buddies, sisters-in-law Eustacia and Gwendolyn Paddington, to show support for the rest of the Paddington family. When one of them appears to have a heart attack in the middle of the second act, Nana D raises her suspicions and asks Kellan to investigate who killed her friend. Amidst family members suddenly in debt and a secret rendezvous between an unlikely pair, Kellan learns the Paddingtons might not be as clean-cut as everyone thinks. But did one of them commit murder for an inheritance?
Kellan's back in his second adventure since returning home to Pennsylvania. With his personal life in upheaval and his new boss, Myriam, making life difficult, will he be able to find a killer or will he get caught up in his own version of stage fright?
Paperback: 270 pages
ISBN-10: 1731310501
ISBN-13: 978-1731310507
Digital ASIN: B07KGGJX1T