Book 3 in the Excalibur Saga 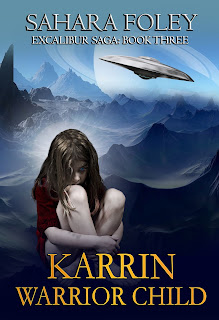 A 6-year-old orphan is hunted by a ruthless bounty hunter.
Found washed up on a beach with no memory and only a name engraved on a bracelet, Karrin is turned over to ‘the Home.’ A dark and terrible place for unwanted children. From the first day of her arrival, the little girl is tortured by the female guards.
Fortunately, she is befriended by Cook. With her help, Karrin escapes the horrors faced by her fellow cellmates and starts a new life. But, her fears of losing everyone she loves still haunts her dreams.
On a distant planet, a bounty hunter accepts a contract to hunt and kill a young, female Earthling. To finish an assassination attempt that went wrong several years ago.
Unknown to Cook or Karrin, the little girl is a descendant of two people with silver power. Fear of that power put a price on her life. When a strange man shows up looking for Karrin, Cook’s suspicions are confirmed. Her Karrin is different.
Now, she must find a way to protect the little girl from the relentless monster on their trail. And, to find out where Karrin really belongs.
—–
* KARRIN: Warrior Child is an ADULT ADVENTURE and not suitable for young readers or people offended by sex and violence. *