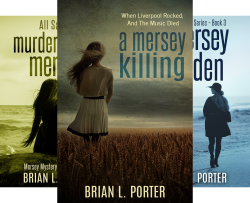 When Brian L Porter entered the world of professional writing just over twenty years ago with his award-winning novel trilogy based on the Jack the Ripper murders in London’s Whitechapel in 1888, any thoughts of creating the current successful series of Mersey Mysteries were far away, buried in a then unknown future. Novel followed novel, and as his success grew, so too did the idea that he would like to write a novel set in his family’s home town of Liverpool, on England’s West Coast. Home of The Beatles and birthplace of the1960s ‘Merseybeat’ sound, the city of Liverpool held many childhood memories, but, for some reason, the author held the belief that any book he wrote would fail to do justice to the city and its people.
All that changed however, when in 2014, ITV Productions released a three-part mini-series based on the early life of British singing superstar, Cilla Black, a native of the city and one of the famed Brian Epstein’s incredible ‘stable’ of 1960s singing talent. Watching the series brought many of Porter’s childhood memories back to life and finally, he felt able to put those memories to good use, by basing his next novel in and around the city. To try and ensure a sense of realism to the characters and events in the book, he based many of the central characters on members of his own family, much as he remembered them in his youth.
So, the book A Mersey Killing was born and the author set the book partially in the early 1960s, as the new music scene began to take place in Liverpool, which would soon reach out and conquer the musical world. He cleverly placed the rest of the book in 1999, the eve of the millennium and readers have since paid great compliments to the ease with which the book slips so easily from time period to the other, and back again.
In what seemed like no time at all, the book was written, edited and published. Much to the author’s pleasant surprise, readers responded positively and the book really ‘took off,’ attracting some terrific reviews. Such was its success that the publishers, Creativia,org, asked Brian if he would be interested in creating a series, based on the central characters and his fictionalised Merseyside Police, Specialist Murder Investigation Team. Book 2 in the series, All Saints, Murder on the Mersey, quickly followed and enjoyed equal success to A Mersey Killing. Readers have really taken to Detective Inspector Andy Ross, his partner, Detective Sergeant Izzie Drake and the rest of the team, and the characters have gradually developed as the series has progressed, some of them attracting their own personal following.
More books in the series soon followed, with A Mersey Maiden, A Mersey Mariner and the recently released A Very Mersey Murder being added to the list. Brian is currently working on book 6 in the series, Last Train to Lime Street.
You can find all of Brian L Porter’s Mersey Mysteries by visiting http://getbook.at/MerseyMysteries a universal link that will take you to your own Amazon website anywhere in the world.
Book of the Year, 2018
As well as each of the books having achieved Amazon bestseller status, book 3, A Mersey Maiden recently won the Readfree.LY ‘Best Book We’ve Read all Year, 2018’ Award, and is currently nominated for yet another award, the TCK Readers Choice Award,  2018.Voting is open until December and you can support Brian’s nomination by voting for A Mersey Maiden (In the Mystery Category) at https://tckpublishing.com/2018-readers-choice-voting-page/

So, what are these Mersey Mysteries about?
Here’s a short intro to each book in the series so far.
A Mersey Killing http://getbook.at/merseykilling
Liverpool, 1999. Skeletal remains found in the docklands lead Detective Inspector Andy Ross and Sergeant Izzie Drake into a journey through time, as the investigation takes them back to early days of the Mersey Beat.
Whose bones laid beneath the mud of the River Mersey for over thirty years, and what links them to a young woman, missing for the entire time?

All Saints, Murder on the Mersey http://getbook.at/AllSaints
What connects bloody graveyard murders, a former mental asylum, a young girl’s suicide and an enigmatic priest?
After the discovery of a body in the graveyard of St. Matthew's Church, another corpse surfaces in St. Mark's churchyard.
Detective Inspector Andy Ross and Detective Sergeant Izzie Drake must lead their team in a race against time to prevent further atrocities. But what links the dead men with an old mental hospital, now an orphanage, and the scarcely reported suicide of a teenage girl? 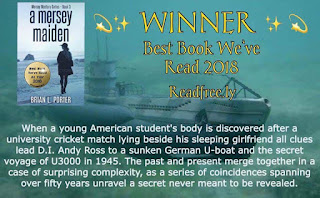 A Mersey Maiden http://getbook.at/amerseymaiden
Winner of the Readfree.ly Best Book We've Read all Year Award, 2018
A peaceful cricket match on a warm summer's day turns to murder and mystery, as the star player Aaron Decker lies dead in his bed, his girlfriend sleeping soundly beside him.

The case takes on a new twist with links to the disappearance of a German U-Boat and a British warship in 1945. With the mysterious Aegis Institute hovering in the background of the investigation, D.I Andy Ross and his team find themselves in their most complex case to date.

With events in Britain, Germany, the U.S.A and a secret submarine base in Canada all involved, Ross and his team need to work together with international law enforcement agencies and a respected German historian to not only solve the murder of Aaron Decker, but the strange case of U3000's last voyage.
A Mersey Mariner http://getbook.at/merseymariner
Death arrives on the morning tide.

Soon after the aging cargo liner Alexandra Rose steams into the fog-enveloped Mersey Estuary, one of the ship’s passengers is found dead in his cabin, leading into Detective Inspector Andy Ross’s most baffling and complicated case to date.
Another death soon follows, and Ross discovers that his case has its roots in the depths of the Amazonian Rainforest. A billionaire entrepreneur, passengers who may not be exactly who or what they say they are, a team of medical researchers and a team of vicious mercenaries combine to confound and complicate what begins as a simple death aboard an insignificant ship.

A Very Mersey Murder http://getbook.at/amerseymurder
1966. England wins the soccer World Cup at Wembley. The same night, the body of a young barmaid is discovered close to an abandoned lighthouse near Liverpool. Two more murders follow, and all remain unsolved.

2005. Detective Inspector Andy Ross and his team are called in when a disturbingly similar series of murders begins in the same location. If their estimates are correct, Ross has one week to solve the case before the third Lighthouse Murder takes place. 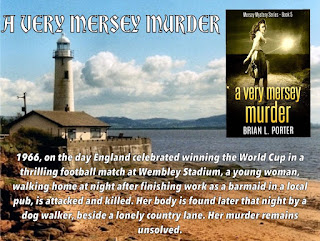 In A Very Mersey Murder, D.I. Ross and Sergeant Izzie Drake return in a tense race against time, as they seek to identify and apprehend a vicious killer who seems to leave no clues and no evidence. The price of failure is death.

Coming soon
Last Train to Lime Street
When a late night train from Manchester to Liverpool hits the naked body of a man as it approaches its destination, it sets in motion a strange case which apparently has no motive. Andy Ross and his team seem to be groping in the dark until slowly, clues begin to be revealed after the dead man is identified as a well-known producer of pornographic movies. Suddenly, the suspect list grows, and the killer of Joey Slimani is painstakingly tracked down by the Specialist Murder Investigation Team.
To see all of the author’s works, including his award-winning true-life dog rescue series, please visit his Amazon author page at  https://www.amazon.com/Brian-L.-Porter/e/B00466KITC 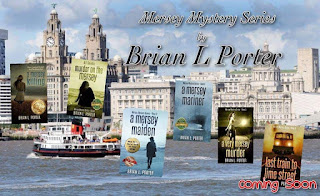