A RIPPLE OF FEAR
written by J.M. Northup 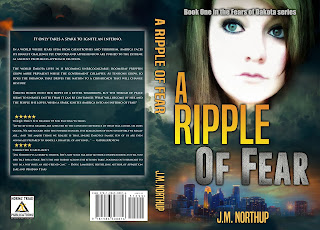 A RIPPLE OF FEAR is on SALE for only 99¢
from August 5th, 2018 until August 12th, 2018
through Kindle Countdown Deals!
Direct Purchase Link - http://mybook.to/A_Ripple_of_Fear

Originally, A RIPPLE OF FEAR was intended to be a prequel to FEARS OF DARKNESS.  I wrote it in response to my readers’ comments, questions, and concerns.  Some genuinely fell in love with my characters, simply wanting to read more about them.  Others posed specific questions they wanted answers to, such as how the war escalate so quickly.  In appreciation to and respect for my readers, I have turned my debut novel into a book series, The Fears of Dakota.
This book is to show the way the protagonists’ lives changed.  I purposely start the book slower in order to draw the reader into the growing hype of paranoia and fear.  This was also a conscious choice in order to show how the characters moved from mundane concerns, such as graduation and college, to a shattered world they no longer recognized.  I wanted to present the struggle these young people face when their hope and opportunities for the future are tragically ripped away from them.
Weaving myths, legends, and prophecies, along with actual world events, I painted a realistic picture of the tone I feel in America today.  I depicted my own fears about how war could plausibly unfold in modern times.  Do you agree with my vision?
If you’re a fan of dystopian science fiction novels, you will love A Ripple of Fear.