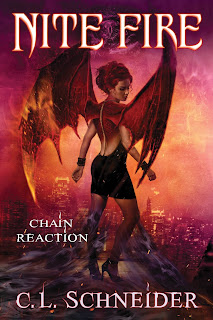 1)      What is the title of your book?
Nite Fire: Chain Reaction
Ø  What is the story abfout?
·   Chain Reaction is the 2nd story in the Nite Fire Series involving shapeshifters, dragons, urban legends, conspiracies, and parallel worlds, all wrapped in a supernatural murder mystery.
Ø  Who is the main character?
·   Dahlia Nite, a shapeshifting creature-hunter from a parallel world ruled by dragons.
2)     What inspired this tale?
Ø  How did the story come to you?
·   I had always wanted to write a story surrounding urban legends. As I created the main character, I decided she was the perfect vehicle for paying tribute to some of my favorite fantasy shows and characters.
Ø  Did you have to research for this novel, and if so, why?
·   I’ve done quite a bit of research for this series: dragons, shapeshifting, urban legends and conspiracy theories, spontaneous combustion and burn wounds, adaptive evolution, genetic mutations, empathic/psychic abilities, DNA manipulation, autopsy, arson and forensics investigations, police procedures, and more.
Ø  If you did research, what do you think surprised you most to learn and why?
·   I was surprised to learn of a conspiracy theory involving influential members of society being replaced by reptilian shapeshifters. It amazed me how many people actually believed that! Though it does fit nicely with my story 😊
3)     Do you relate to your character?
Ø  Is your protagonist anything like you personally?
·   Not really. Though, there might be a few, small similarities.
ü   If yes, then how?
o   Dahlia drinks too much coffee, doesn’t get enough sleep, and she loves to eat!
ü   If no, how do you differ from one another?
o   Dahlia has compassion, but she can shut it down to get the job done. Even knowing there might be consequences if I didn’t act, I’m not sure I could put aside my feelings as well as she does.
Ø  What made you write this character; were they based on a real person or something that inspired you?
·   Dahlia was inspired by characters from some of my favorite TV shows: Supernatural, X-Files, Jessica Jones, Lost Girl, to name a few.
ü   What should readers know about this character?
o   Dahlia is resilient. She’s a survivor. She makes the hard choices. If necessary, she will kill without hesitation. Yet she isn’t without compassion. Dahlia is an empath and her ability to feel the pain of others can sometimes keep her from being as objective as she should be.
ü   Why is this character important to you?
o   I was anxious to write a strong female protagonist, but after writing epic fantasy from the perspective of a male for so many years, I was nervous about switching gears. I hoped fans of Ian Troy would embrace Dahlia. I was proud of her and the story, but there were so many differences between the series. The fact that Dahlia has been so well received by my readers, really feels like an accomplishment.
Ø  Do you consider the main character of your story to be good or bad, and why?
·   I see Dahlia as both good and bad. She is a trained assassin and spent years killing without mercy. She left that life behind nearly a hundred years ago. But those instincts are still in her. She isn’t afraid to make the hard choices, and they aren’t always nice ones.
Ø  What’s the objective of your character?
·   Dahlia’s goal is to protect humanity from the creatures that cross in from other worlds, while simultaneously hiding the existence of those worlds and their inhabitants.
4)    Is there anything you specific want readers to know about this piece of work?
I want my readers to know that I’m having a blast writing this series. After The Crown ofStones, I wanted something with less of an epic feel, something that wasn’t so emotionally heavy and complex. Nite Fire fit the bill. It’s fast-paced, full of snark and action. I hope they have as much fun reading the books as I’ve had writing them.
Ø  Is there a particular idea or morale you are trying to convey?
·   Not really. There are themes and messages if you look for them, but Nite Fire was primarily written to take the reader on an entertaining, action-packed ride.
5)     Is this novel a standalone?
No.
Ø  If it is a part of a series, what’s the series name?
·   Nite Fire
Ø  If it is the first in a series, when can we expect to see the next book published?
·   This is the second book. It is available now for pre-order: http://mybook.to/NF2
Ø  If it is a part of a book series, can it be read as a standalone or do you need to read the entire series to experience the full realm of the tale?
·   You wouldn’t be completely lost if you read Chain Reaction as a standalone. Each book has a specific mystery for Dahlia to solve, but there are also underlying mysteries and deceptions that will unfold throughout the series. A lot of the nuances would be missed if the books were read out of order.
6)    Where can readers connect with you and purchase your book?  If you have a universal link, please provide it here.
http://mybook.to/NF1 or http://mybook.to/NF2 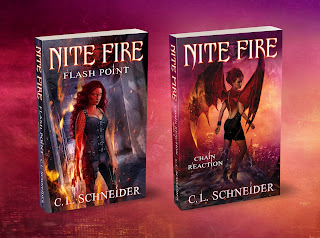