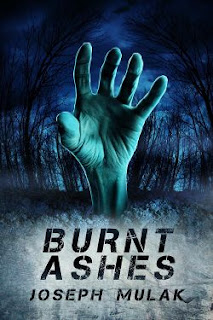 1)      What is the title of your book?
Burnt Ashes. For now, anyway. Apparently the publisher wants to revamp the whole thing. New title, new cover, new author…
Ø  What is the story about?
·   It’s a zombie story with a twist, though I tried not to use the word “zombie” in the story. I think it shows up once or twice at the most.
·   It’s about a new drug on the streets that causes the zombie epidemic.
·   Two brothers who can’t stand each other find themselves trying to protect the people they love while the whole city falls into chaos.
Ø  Who is the main character?
·   The two main characters are Todd and Mitch Wright, two estranged brothers who are complete opposites.
·   Todd is a failed musician. He’s divorced and a deadbeat dad, as well as an addict.
·   Mitch is a doctor, happily married, and expecting his first child.
2)     What inspired this tale?
Ø  How did the story come to you?
·   Originally, it was going to be a short story.
·   The idea of someone about to jump off a bridge having a conversation with someone else who already did it, and survived, just popped into my head.
·   As I wrote, the idea kept expanding, and eventually, elements from my relationship with my brother started coming into play.
Ø  Did you have to research for this novel and if so, why?
·   No. The drug involved is completely invented, as are all the locations. So, no research was needed.
3)     Do you relate to your character?
Ø  Is your protagonist anything like you personally?
·   Absolutely.
ü   If yes, then how?
o   Out of all the characters I’ve written, Todd is probably the one I relate to the most. Failed musician, past issues with drugs, feels like his brother is condescending toward him.
o   The one major difference is the deadbeat dad thing. Though their mother and I are divorced, my kids and I have a great relationship.
Ø  What made you write this character; were they based on a real person or something that inspired you?
·   Both main characters came out of unresolved feelings between my brother and me.
ü   Why is this character important to you?
o   The main characters are flawed in ways that make them believable.
o   Todd is irresponsible and selfish.
o   Mitch is a jerk, but believes he is doing the right thing.
Ø  Do you consider the main character of your story to be good or bad, and why?
·   Both, I guess. Both characters are trying to do what’s right for the people they love. They just want to protect them, but the brothers are both selfish in their own right, and can’t put their differences aside long enough to do much good.
Ø  What’s the objective of your character?
·   To escape the city and protect their families.
4)    Is there anything you specific want readers to know about this piece of work?
Ø  Is there a particular idea or morale you are trying to convey?
·   Don’t do drugs?
·   No. I don’t think there’s any moral to the story. This is me just exorcising my own demons, and trying to entertain people along the way.
5)     Is this novel a standalone?
Yeah. I left it open to a sequel, and I’ve had some people ask me for one, but so far, I don’t have any plans to do one. I have too many other ideas I want to get to rather than spend too much time on this one.
6)    Where can readers connect with you and purchase your book?
Readers can connect with me on Facebook, Twitter, or my website www.josephmulak.com.
The book can be purchased from Amazon using this link: http://mybook.to/BurntAshes
Posted by J.M. Northup at 5:23 PM