Past Lives by Chantal Bellehumeur 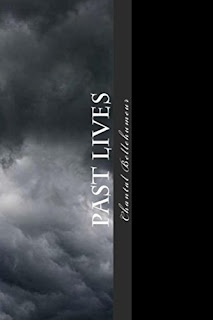 1)      What is the title of your book?
The title of my historical/paranormal book is Past Lives.
Ø  What is the story about?
·   The general story is about a woman discovering her past live through hypnotic sessions, and writing a memoir about them.  Each Chapter of the book is about a different life (or ghost life).
·   The starts off in the present as an introduction, then goes to the late 1400’s.  It slowly moves up in history (1500, 1600, 1700, 1800, 1900) to return to the present.
·   In her first lift, the main character comes from a wealthy family and is in love with a peasant, which does not please her father.
·   In another life, she gets falsely accused of theft and gets imprisoned.  She wishes to get a fair trial, but…
·   She then gets adopted by poor farmers and comes face-to-face with a girl who looks identical to her, aside from the fact that she obviously comes from a higher class.  She is denied the request to spend time with this girl based on criminal allegations against her father.
·   She finds herself in an orphanage and ends up witnessing the hanging of a king after sneaking out with a friend.  While in the crowd, something bad happens.
·   She survives the black plague, and lives through the great fire of London.
·   After her father’s death, her sister and she were forced to work as servants.  Two men threatened to take their livers if they didn’t figure out a way to repay the high debt their father left behind.
·   She spent time in an asylum.
·   She lived the life of a pirate and had to face hard days at sea, as well as, battles…
·   She fought an illness as a girl.
·   She worked as a nanny while Jack the Ripper roamed the streets killing prostitutes, like her mother.
·   She lived in Canada, and discovered harsh winters.
Ø  Who is the main character?
·   The main character is a woman named, Sandra (her name changes in each past life).
2)     What inspired this tale?
Ø  How did the story come to you?
·   Although the main idea randomly came to me while I was on sick leave in the summer of 2016, most of the story was inspired by the memories of a trip I took to London, England back in 2007.
·   During my short stay in London, I visited the London Dungeon, which displayed the past horrors of the city, the Clink Prison Museum, located on the original site of the old prison, as well as, the Tour of London.  I also had the pleasure of seeing a Shakespearean play at the Glove Theatre.  It all came back to me in a flash, and I consulted my travel journal.
Ø  Did you have to research for this novel and if so, why?
·   I had to do A LOT of research for this novel, in order to include historical facts and public figures, etc.  I also had to portray the way people lived and dressed in each time period.
Ø  If you did research, what do you think surprised you most to learn and why?
·   I have always been fascinated with English history.
·   Most of what I learned was not surprising to me.
3)     Do you relate to your character?
Ø  Is your protagonist anything like you personally?
ü   If yes, then how?
o   I, personally, believe in reincarnation, and sometimes have short recurring dreams in which I am living in a different time period.  I am curious about my possible past lives, but – unlike my character – I think I would be too afraid to do hypnotic sessions.
Ø  What made you write this character; were they based on a real person or something that inspired you?
·   The main character is fictional, although meant to appear real.  I wanted my short stories to feel like they actually happened.  Hence, why I used a lot of historical background.  They all follow each other perfectly; one character dies, another is reborn, or becomes a ghost and is reborn later.
ü   What should readers know about this character?
o   Sandra had many vivid dreams that felt so real.  When she woke up from them, she felt confused about her surroundings and wondered what was going on.
o   Sandra began to wonder if her dreams (more like nightmares most of the time) were memories of past lives.
o   Sandra consulted a psychology professor who recommended she try being hypnotized.  She didn’t like the idea at first, but eventually curiosity got the best of her.
o   During her recorded hypnosis session, Sandra learned of twelve different past lives, as well as three ghost lives, between the late 1400’s and late 1900’s.  She lived in England for the most part, but eventually, her soul was reincarnated in Canada.
o   Sandra typed up notes while listening to the recordings of her sessions.
o   This book is Sandra’s memoir of the past lives her hypnosis sessions helped her recover.
ü   Why is this character important to you?
o   She helped me create fictional stories while also providing many historical facts.  I feel like readers will enjoy the general story, but also learn a lot.
Ø  Do you consider the main character of your story to be good or bad, and why?
·   I consider my main character to be good.
Ø  What’s the objective of your character?
·   To discover potential past lives.
4)    Is there anything you specific want readers to know about this piece of work?
The book reads like a memoir, but it’s a work of fiction.
Ø  Is there a particular idea or morale you are trying to convey?
·   Yes, I was trying to convey a particular idea.
ü   If yes, then what and why?
o   Reincarnation may be possible.
5)     Is this novel a standalone?
This novel is indeed a standalone.
Ø  If it is a part of a series, what’s the series name?
·   No, this book is not part of a series.
6)    Where can readers connect with you and purchase your book?


Readers can connect with me on my Facebook author page, and they can purchase the historical/paranormal book on Amazon.
Posted by J.M. Northup at 8:03 AM