WIPs and New Releases
1)      Tell us about your New Release…
Ø  What is the story about?
·   ‘Red Herrings Can’t Swim’ (A Nod Blake Mystery).
·  It’s about crazy murder, an engaging detective, an inventive killer, and lots and lots of plot twists. My detective, owing to a series of head injuries (which force him to receive random psychic flashes) and a well-meaning secretary (who’s always getting him into trouble), must solve a group of murders to prevent being arrested for committing them.
Ø  Who is the main character?
·  Nod Blake, the last gumshoe, a dinosaur of a detective (with the street savvy of Humphrey Bogart, the toughness of Lee Marvin, the wit of Oscar Wilde, and the luck of Lou Costello) who never got the memo he was extinct.
2)     What inspired this tale?
Ø  How did the story come to you?
·  It is the first sequel to my Amazon #1 best seller (in both Supernatural Mystery and Hard-boiled Mystery categories) ‘Corpses Say the Darndest Things’.
Ø  Did you have to research for this novel and if so, why?
·  Of course, the novel takes place in 1979 and much of the story is situated in and around a circus performing on Navy Pier in Chicago at that time. Lots of research to get that background and setting accurate.
Ø  If you did research, what do you think surprised you most to learn and why?
·  I love information and trivia, so all research – to me – is sauce for the goose. The history of the circus is fascinating. The history of Navy Pier as well. Today, Navy Pier is the mid-west’s #1 tourist destination. For most of the last century, it was a white elephant for which the city of Chicago struggled to find a use.
3)     Do you relate to your character?
Ø  Is your protagonist anything like you personally?
·  Always a yes and no answer.
Ø  If yes, then how?
·  Like me, he faces adversity with a bent sense of humor and takes (or leaves) people as they come.
Ø  If no, how do you differ from one another?
·  Blake admits to a soft spot for folks who are down and out. I never admit to anything.
Ø  What made you write this character; what made them important to you or made you want to tell their story?
·  Blake was originally created at the request of a director friend – as a film detective in a straight murder mystery. The film was never made.
·  I completely rewrote Blake as a novel (unpublished); still as a straight detective.
·  When horror writer and friend, Carole Gill, asked if the book was supernatural, I got a fresh idea and rewrote the character and book again. Suddenly the luckless Blake was getting psychic flashes and victims were begging him to solve their murders. He did so, with a 40’s film noire style (despite it being 1979) and a lot of wit, and the grisly and hilarious ‘Corpses Say the Darndest Things’ was born.
·  The new story came about because, thank goodness, Blake found an audience (fans!) who enjoyed the first roller coaster ride and asked to go again. Sequel required!
4)      Is there anything you specific want readers to know about this piece of work?
Blake is back! If you enjoyed ‘Corpses...’ you’ll love ‘Red Herrings Can’t Swim’. Lots of laugh-out-loud moments as my has-been detective struggles to catch a new crazed killer and save his own bacon. (Warning: Murder and Adult Language)
If you haven’t read ‘Corpses...’ you will still, absolutely, enjoy the ride! (But read ‘Corpses’, for heaven’s sake, I’m destitute!!)
5)      When will the novel be available for purchase?
As they say in the biz… Soon to be published. Coming soon.
Ø  Has the book already been published?
·  It’s in the publisher’s (and designers’) talented hands as we speak!
Ø  If not, when is the approximate release date?
·  Best guess, within the next two months, mid-June 2017.
·  Until it arrives, have posted the link for the first book in the series below.
Ø  ‘Corpses Say the Darndest Things’ is available in both English and Spanish editions! 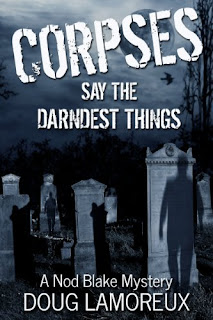 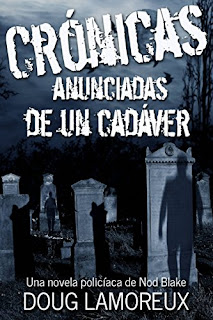