FROM THE AUTHOR:
I’m excited to share with you the cover for my new release!
After completing the Crown of Stones Trilogy last year, I wanted to do something different. And this series is it!
Flash Point is the 1st book in The Nite Fire Series, a fast-paced, entertaining urban fantasy full of action and mystery.
Nite Fire centers on the character of Dahlia Nite, a shapeshifting creature-hunter from a parallel world—ruled by dragons. 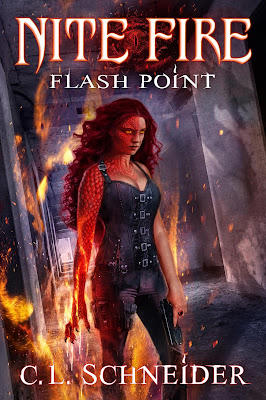 Slated for execution, shapeshifting assassin, DahliaNite, flees her world to hide in the human realm. As payment for the shelter they unknowingly provide, Dahlia dedicates herself to protecting humans from what truly lives in the shadows. Moving from town to town, she hunts the creatures that threaten an unsuspecting human race; burying the truth that could destroy them all.
But the shadows are shifting. The lies are adding up. And when Sentinel City is threatened by a series of bizarre brutal murders, light is shed on what should never be seen. The secrets that have kept humanity in the dark for centuries are in danger of being exposed.
Wrestling with a lifetime of her own deceptions, Dahlia investigates the killings while simultaneously working to conceal their circumstances. But with each new murder, the little bit of peace she has found in this world begins to crumble. Each new clue leads her to the one place she thought to never go again. Home.
AVAILABLE NOW in paperback - eBook to follow!
EXCERPT:
His roar blew the hair back from my face. His oddly pliable jaw opened with a wet crack of cartilage. Dropping, extending past throat, then chest, the square edge of his jaw came to rest even with the center of his abdomen. Outlined by fleshy lips, the dark maw within held an inner ring of uneven teeth, all stained with a deep red grime. Pushing out from their center, the del-yun’s gray tongue ejected like a whip. A heavy discharge of green followed. Hitting the floor in front of me with a moist splat, the glop of saliva gurgled and smoked as it devoured the concrete. A smaller rivulet of smoke curled up from the front of my left boot, where tiny beads of the creature’s spit were eating through the laces.
“Come on,” I groaned, “not the boots…” Bending, I slid my knife in behind the black crisscross. In the corner of my eye, I saw his tongue emerging again.
I broke the lace with a quick yank.
Flinging off the still-bubbling piece as I straightened, I flung the knife next. My throw was directed at his tongue, hoping to sever the bit wagging down over his teeth. But at the last second, he moved. My weapon sailed past his tongue, in through his wide mouth, and impaled his left cheek. The tip of the blade pushed out with a spill of yellowish blood and sliced tissue.
I raised a finger. Fire trickled from my nail. It slid off the side of my hand and onto the floor. Watching its journey, the del-yun knew: one little touch was all it would take. His blood would catch like kindling, and my fire would follow it down inside him like a flame on a fuse. 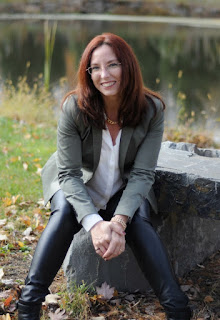 AUTHOR BIO:
C. L. Schneider is a New York-based author of adult epic and urban fantasy. Born in a small Kansas town, she grew up in a house of avid readers and overflowing bookshelves. Her first full-length novel took shape in high school, on a typewriter in her parent’s living room. Schneider’s epic trilogy, The Crown of Stones, tells the story of Ian Troy, a man born with an addiction to magic. Nite Fire: Flash Point is the first book in a fast-paced urban fantasy series with shapeshifters, dragons, and parallel worlds.
Learn more about C.L. Schneider and her work at clschneiderauthor.com where you can read reviews, excerpts and sneak peeks, and subscribe to her newsletter. An active part of the indie author online community, you can connect with her on Twitter, Facebook, Goodreads, and Google+, where she is often found chatting about books, zombies, coffee, and the daily ups and downs of writing.
Posted by J.M. Northup at 7:45 AM

Email ThisBlogThis!Share to TwitterShare to FacebookShare to Pinterest
Labels: #CoverReveal