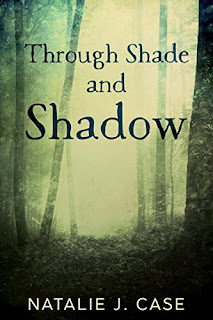 1)      Tell us about your New Release…
Ø  What is the story about?
·  Through Shade and Shadow is a story about two men who find themselves the objects of a xenophobic hate group that is trying to take over America.  It begins with a serial killer’s capture, an event that exposes the existence of Shades and paints them as killers, kick-starting a knee-jerk reaction that, in the early days of a presidential election, divides the country.
Ø  Who is the main character?
·   Mason Jerah is a Shade, which is a paranormal sort of healer who lives a solitary sort of life in the California mountains until his grandmother dies and he sets out to reclaim the family tradition.
·  Alaric Lambrecht is a Shadow, a member of a tribe of psychics for lack of a better word.  He is an empath, so he can feel what other people are feeling.  As an aide for his father, a local politician, he has a front row seat when things start to fall apart.

2)     What inspired this tale?
Ø  How did the story come to you?
·   I’m never really sure where some of the things in my head come from, if I’m honest.  Anyone who reads me knows I have a love of vampires and I’m always looking for a way to make them my own.
·   Mason kind of started there, and the story started with the character.  I wanted to explore some of the things we expect in a vampire, but play them out in a different way.
Ø  So, Shades can’t go out in the sunlight.  They don’t burst into flames or anything, but they do burn faster and easier, and the consequences are more severe.
Ø  From there I thought about how vampires can “heal” a person by turning them, but decided that Shades would have the ability to heal through energy.
Ø  The rest just sort of built out of those things.
·   Then, one only has to look at the political climate today to understand how society would react to suddenly learning that there were people with these abilities.  That’s really what shaped a lot of the plot.
Ø  Did you have to research for this novel and if so, why?
·   I did a lot of scouring maps.  There were certain scenes in the larger story that I had specific environmental needs for, so I had to figure out where I could put those scenes, especially when they bleed from one to another, and how that informed the places for the rest of the story.
·   I also did a lot of looking around the east coast of the US for odd things like coffee houses, cemeteries, city and state parks and other stuff.  I like to at least make an attempt at putting things in places that seem real.  Don’t want to stick a cemetery in the middle of a shopping district.
Ø  If you did research, what do you think surprised you most to learn and why?
·   I’m not sure really that I was surprised by anything.  Most of the places I researched I had at least a passing familiarity.
3)     Do you relate to your character?
Ø  Is your protagonist anything like you personally?
·   I think they both have elements of me, but unlike my first novel, Forever, in which the protagonist was very much like me in many aspects, neither of them are even close to carbon copies.
Ø  If yes, then how?
·   I think that Mason, who is the younger of the two, just turning 18 as the story opens, I modeled some of his naivete on the person I was at the same age.  For very different reasons, mind you, but I was not a worldly sort of person at 18.  And my wakeup call was nearly as abrupt as Mason’s is.
·   In Alaric though, there is more of who I am now.  I am extremely sensitive to the moods and feelings of others, which is part of what drives my agoraphobia issues.  Large groups of people can be terrifying for me and emotionally overwhelming.  This is something Alaric struggles with as well.
Ø  If no, how do you differ from one another?
·   Mason is a man without an anchor for a lot of the book.  Circumstances blow him off course and he just goes with the flow, even when that flow takes him away from the things he thinks he wants.  I’m much more stubborn.  I’ve learned to bend a bit, ride out a storm, but I always re-orient back to the original plan if I can.
·   Alaric is a reluctant leader.  He is content to be second fiddle, to be help and support, but he drags his feet when it comes to stepping into the role he thinks belongs to another.  I’m much more of a step-in, assess and do kind of person.  I don’t need the accolades of being a leader, but I’m very much a take charge and get the work done sort.
Ø  What made you write this character; what made them important to you or made you want to tell their story?
·   In both of these characters I was exploring what I would do if I found myself in a place where large, scary groups of people were targeting me with hate and violence (Mason) or I was capable of seeing in to the future and knowing that this hatred and violence would lead to civil war (Alaric).  We’ll leave aside that my country resembles this an awful lot right now.  In writing these two characters (and the rest of the book) I am able to explore all the ways I might react.
4)    Is there anything you specific want readers to know about this piece of work?
I started this story nearly seven years ago, well ahead of the current political nastiness we find ourselves in here in the States.  I was working on it slowly, as one of three things I was toying with for my second novel, and had it mostly sketched out when I recognized the similarities between what I was writing and what was happening.  That was when I decided that this series needed to be the next one I finished.
5)     When will the novel be available for purchase?
Ø  Has the book already been published?
·   The paperback is available now, and the Kindle version will be available on Feb. 1, 2017 (though it can be pre-ordered).
Ø  If yes, do you have a link available for buying it or how can a reader purchase it?
·        Paperback
Ø  You can ‘special order’ a hardcopy from any bookstore using the ISBN numbers
·   ISBN-10: 1542624851
·   ISBN-13: 978-1542624855
·   KINDLE version