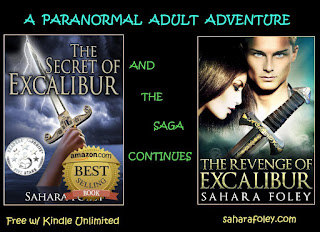 The Secret of Excalibur by Sahara Foley
My rating: 5 of 5 stars

An Exciting and Adventurous Read!

I wasn't sure what to expect from this book, but it definitely exceeded my hopes! The story was interesting and kept driving forward. The tale was intelligent and fascinating, putting a new spin on an old legend. I applaud the author - well done!
I was constantly surprised by the intriguing storyline. At first, I didn't much care for the arrogant Arthur Merlin, but by the end, I adored him. I thought Ruth and Daisy were admirable equals to Arthur and I liked the characters very much. I found I wanted to know more about them and I hope there's a sequel in the works!
I definitely recommend this novel to all readers. There are moments of steamy romance and hilarious banter mixed with a spectrum of emotions, action, mystery, and suspense. The author did a beautiful job of blending old lore with modern concepts that opened a universe of possibilities! I loved it!

The Revenge of Excalibur by Sahara Foley
My rating: 5 of 5 stars

A delightful spin to an old tale!

What a fun series! It was nice to catch up with the characters I'd met in book one, and to meet new ones! I don't have one particular character that spoke to me most, but rather, I enjoyed the contrast in personalities.
My favorite part was the aliens and their worlds. I thought the author did a fantastic job with her descriptions and I was certainly intrigued by her vision of extraterrestrial life. I thought the way she presented thoughts, telepathy, visions, and speech was helpful in my understanding of the events and conversations as well as identifying what communication was being utilized.
Well done sci-fi. It's an interesting take on an old story, reinventing it to a fresh and modern adventure.