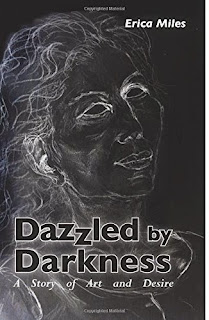 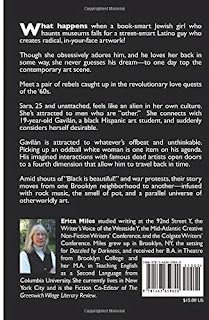 All proceeds from the sale of DAZZLED BY DARKNESS will be donated directly to The W.A.N.T.E.D. Project, a Motivational Training Program for Young Men of Color, led by the Rev. Kymberley Clemons-Jones, Author of "Cured but not Healed: How to Experience Deeper Faith on Your Journey With God."

“This deeply textured first novel by Erica Miles welcomes the reader into a world where fantasy and reality, darkness and humor, race and art, and, ultimately, love and longing intermingle in a dance of opposites that both explore and reveal. An adventurous debut!”
—David Pérez, Author of Wow! 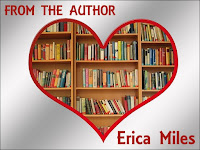 SCHIZOID IN THE SIXTIES
While other young Americans were caught up in Civil Rights marches, the Vietnam War, protest songs, and psychedelic drugs, Sara Got was hearing voices in her head and trying to relate to them.  It was the decade when John F. Kennedy, Malcolm X, and Martin Luther King. Jr. had been assassinated, and psychopaths were rampant in the nation.
Sara’s delusionary voices weren’t screaming hysterically, telling her to kill people. In truth, they sounded just like telephone voices—“Hello? Who is it?”—speaking at the same time as the loud-mouthed men and women around her, making themselves heard above the everyday sobs of electric guitars, chatting away to their friends on a mysterious party line wired to her brain.  Still, they were distracting.
How could she work, for example, or lead an ordinary life?  And aside from those personal considerations, what if the disturbance worked both ways?

Do the voices sense my presence, my breathing, my beating heart? Do they interrupt their ranting as I silently respond? Do they somehow seem to know that I’m their friend?

One voice, in particular, commanded Sara’s attention. It spoke in Black slang, and—as any fantasy-ridden woman would expect—its late-night calls were all about you guessed it!—turning her on. Not sexually, but linguistically. It’s fascinating rhythms, so loose and free, resonated with a wild streak deep within her.

I’ll call this voice “Sweet Sir Galahad,” so he can come into my bedroom at night through the window.

How much should she tell her doctor? Better just let him know she still felt depressed, had trouble concentrating, felt lonely and isolated at times—the usual patient complaint list.

But he saw through her. “You can’t stop hallucinating,” he remarked, when she showed up that Monday. “I could send you to the hospital—but I’d rather not.”
How did he know?
“Oh, no, please don’t send me to the hospital.”
“I won’t—if you’re willing to work with me. But you need to find some structure in your life.”
“Like a real job?” Sara offered.
“Well, I didn’t exactly mean—but it’s not beyond— You think you could handle that, Sara? A little more medication might make it possible.”

As long as it doesn’t interfere with my voices. Especially his. You can take away the rest—but not “Sweet Sir Galahad!”

She couldn’t picture his face, but she knew he went from phone booth to phone booth, all over Brooklyn, just to reach her. Even though he was talking to somebody else.

Sara lived in Flatbush, but longed to explore other parts of Brooklyn, too. So, deciding to leave her parents’ house—I’m twenty-five year’s old, for God’s sake!—with a nod from her shrink, she set out on her journey.

Being a fan of fine art, the first thing she did was circle a Help-Wanted ad in The New York Times for a secretary at the Brooklyn Museum Art School.
LOOKING AT TREES
A week later, Sara was sitting at a green aluminum desk in a tower office, surrounded by brightly colored tempera paintings, buoyed by the novelty of typing letters that asked for money.
The museum was just her kind of place—a monumental building, taking up an entire block on Eastern Parkway, and topped by an eerie-looking dome.

The gothic arched window in her office—on her supervisor Margaret’s side—offered a microscopic view of the Botanical Gardens below. Since the fall flowers were now in bloom, Sara decided she’d spend the lunch hour of her first day strolling through those gardens.

When the clock with Roman numerals on the wall showed both hands on the XII, she let out a working woman’s sigh, aglow with a sense of normality.  Neither Margaret nor Lloyd had criticized any aspect of her performance so far, despite her stolen glances out the window.  This job was going to be a breeze!
She boldly stood up from her desk, pulled her sweater from a peg on the wall, and announced that she was going to lunch.

How ethereal the scenery was in the fall, a well-kept secret!  How thickly the foliage grew on a wisteria-covered arbor!
Some of the deciduous trees were just beginning to turn orange.
Flower beds, verdant and dense with blossoms—chrysanthemums, daisies, lavender, phlox, the last of the summer roses.

What do I smell? Is it everything? And why am I feeling so strange? It’s like I’m—happy....

She wandered down a deserted lane of lampposts and benches, with fertile crab-apple trees on either side.
What a paradise for the small, probably migrating, birds she saw feeding off the tiny fruit.

At last, she came to a spacious lawn, such as one might see before a Southern manor.
She stopped to admire a Japanese cherry tree, while tearing off pieces of her tuna sandwich to throw to the pigeons on the grass.

The silky-barked tree was bare—it was well past the cherry blossom season—but its trunk was gracefully divided into two parts, branches twisting outward.

As Sara looked through the opening from twelve feet away, she found herself staring straight into the bemused eyes of a young Black man, standing immediately on the other side, practically camouflaged.
-----

What happens when a book-smart Jewish girl who haunts museums falls for a street-smart Latino guy who creates radical, in-your-face artwork?
Though she obsessively adores him, and he loves her back in some way, she never guesses his dream—to one day top the contemporary art scene.
Meet a pair of rebels caught up in the revolutionary love quests of the ’60s.
Sara, 25 and unattached, feels like an alien in her own culture.  She’s attracted to men who are “other.”  She connects with 19-year-old Gavilán, a black Hispanic art student, and suddenly considers herself desirable.
Gavilán is attracted to whatever’s offbeat and unthinkable.  Picking up an oddball white woman is one item on his agenda.  His imagined interactions with famous dead artists open doors to a fourth dimension that allow him to travel back in time.


Amid shouts of “Black is beautiful!” and war protests, their story moves from one Brooklyn neighborhood to another—infused with rock music, the smell of pot, and a parallel universe of otherworldly art.