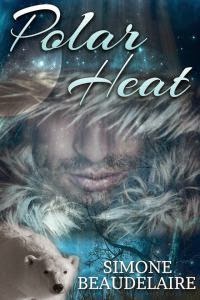 1)      Tell us about your work-in-progress, or WIP, as it’s known as in the industry or New Release… Polar Heat
Ø  What is the story about?
Russell is a pilot for a small school district in central Alaska. He flies teachers from one remote building to another. One of the new teachers is Riley, who is responsible for kindergarten classes in two towns. Russell takes one whiff of Riley’s scent and knows she’s his fated mate… except for one problem: he’s a polar bear shape shifter. He has no idea how to break THAT news to the girl he can’t stop thinking about.
Ø  Who is the main character?
Russell Tadzea and Riley Jenkins
2)      What inspired this tale?
Ø  How did the story come to you?
I’d been promoting a different shape shifter romance at a Facebook page dedicated to the genre. One of the members posted a picture of a sexy older man with white hair, and everyone suggested he must be a polar bear.
Ø  Did you have to research for this novel and if so, why?
I did a great deal of research about Alaska, and in particular the Den’a, an Athabascan Native group. Russell is a member of a small branch of the Den’a, so I wanted realistic details.
Ø  If you did research, what do you think surprised you most to learn and why?
I was surprised to learn that the Den’a in Alaska, New Mexico and the Pacific West Coast of the US are all related. They’re a far-flung and very interesting group.
3)      Do you relate to your character?
I don’t relate to Russell much, sadly. However, I do find older men quite appealing, so I relate to Riley in that way.
Ø  Is your protagonist anything like you personally?
Riley is shy but passionate, so that’s like me. She reads a lot and likes teaching.
Ø  If no, how do you differ from one another?
My boyfriend isn’t a shape shifter… though he writes about them. Also, she teaches kindergarten while I prefer working with adults.
Ø  What made you write this character; what made them important to you or made you want to tell their story?
Riley is the sort of character I often write. I tend to fixate on shy girls. In this world, self-confident women get their pick of men, so I write this way to level the playing field.
4)      Is there anything you specific want readers to know about this piece of work?
It’s mean to be a fun, escapist story. I hope it is.
5)      When will the novel be available for purchase?
It’s live now
Ø  Has the book already been published?
yes
Ø  If yes, do you have a link available for buying it?
http://www.amazon.com/Polar-Heat-Simone-Beaudelaire-ebook/dp/B00XZ8HXEA