Sahara Foley's THE SECRET OF EXCALIBUR! 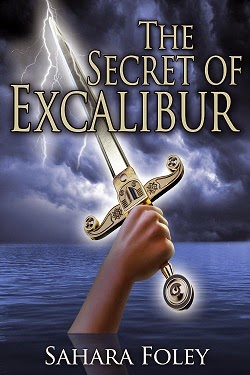 Click on photo to be redirected to Amazon for purchasing
1)      Tell us about your work-in-progress, or WIP, as it’s known as in the industry or New Release…

Ø  What is the story about?
·   It’s about an American man who develops “superpowers” after a freak accident. He becomes involved with several government agencies who try to help him control his powers, but also want to use him for their own ends.  After several years of being used, he starts feeling an urge to travel to England.
·   He ends up at the Institute of Psychic Research in England, and that’s where the story starts.  There he meets Dr. Ruth Burns and Commander Dobie of MI3.  Dobie also wants to control him, but he uses Ruth Burns instead.
·   After an incident at Heathrow Airport, along with Ruth Arthur, he takes a trip into the English countryside.  They end up at Lake George, where the Lady of the Lake and Excalibur are known to be seen.  With his “superpowers”, Arthur feels he can, for once and all, discover the truth about the legend of Excalibur.  But what they find is more than anyone imagined.

2)      What inspired this tale?
Ø  How did the story come to you?
·   This is my late husband’s tale, so I’m not sure what inspired him to write this specific story.  Bob always told me had stories pestering him to come out.
Ø  Did you have to research for this novel and if so, why?
·   I’m sure Bob did, but back in the late 1980’s, that would’ve meant going to the Library, as there wasn’t any internet back them, or at least Google.
Ø  If you did research, what do you think surprised you most to learn and why?
·   When I started working with the outline, I did do some Google searches about Excalibur and who actually threw the sword into the lake, and it wasn’t Sir George.  It was a Sir Bedevere.  I have no idea where Bob got Sir George.  I debated with myself about changing it to Sir Bedevere, but actually, Sir Bedevere wasn’t a nice person, so I kept it as Sir George.

3)      Do you relate to your character?
Ø  Is your protagonist anything like you personally?
·   Arthur Merlin is so much like Bob.
Ø  If yes, then how?
·   Arthur’s sense of humor, how the best laid plans never work, even to the freak accident that caused his “superpowers”.  Of course, Bob didn’t get powers; he just ended up with a severe concussion.
Ø  What made you write this character; what made them important to you or made you want to tell their story?
·   Here again, I’d have to ask Bob.  I have no idea why he wrote the stories he did.  Maybe he had a fascination with the whole King Arthur and Merlin legends.  If he did, we never talked about it.

4)      Is there anything you specific want readers to know about this piece of work?
This is not your typical King Arthur and the myth of the Lady of the Lake and Excalibur.  This story is set in modern times and the reader will discover who the Lady is and what Excalibur is.

5)      When will the novel be available for purchase?
Ø  Has the book already been published?
·   Yes, through a wonderful small press called Creativia Publishing.
Ø  If yes, do you have a link available for buying it?
·

This is an affiliate link so Sahara earns commissions if someone clicks on it.
Posted by J.M. Northup at 11:00 AM