Do You Want More from FEARS OF DARKNESS? 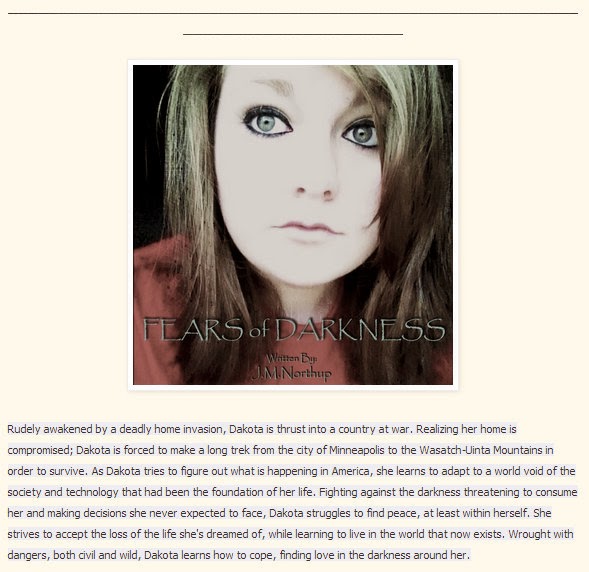 Did you feel like there wasn't enough in my novel?
In trying to keep the book a manageable size, I omitted details that I didn't think were necessary to the plot or characters.  I left some things purposely blank for the reader to fill in; making it a more personal story.  Still, I have gotten feed back that some readers would like more details.
Do you want more information about the war and civil unrest?
I didn't want the war to be the main focus of the story; just the catalyst that put the kids into their situation.  Some of the feedback I've gotten suggests that some of my readers would like a more concrete depiction of the uprising.  They wanted more information about the history and development of the war.  Though I pictured the human reaction to extreme (like seen with various riots), some of my readers feel that I need to put more into the back story to make it more plausible.
Would you read about all the events?
Though I opted to take you through the story with just the knowledge Dakota and her family had, feeding information about the world to the reader as it was acquired by the characters, some readers thought I was being coy.  I assure you that I wasn't trying to be coy.  Though it is a tactic to keep the reader coming back for more, that was not my sole intent.  My intent was to have the reader be as confused and frustrated as the characters.  I wanted my readers to take the journey with Dakota and her family; feeling what they felt in the moment.
Would you want an additional book that would help give more of the details behind the scenes; things the characters didn't have access to?  Do you want more?
Would you want a prequel?
Would you want another book that would build up to where FEARS OF DARKNESS begins?  Would you like more details on the group of young adults and the lives they had before the war?
Would you want to read how the war reached it's explosive start and the impact it had on these young people as it grew?
Would you want a sequel?
Would you want another book that would pick up where FEARS OF DARKNESS left off so you could see the new life Dakota and her family share?
Would you like to see Georgia find "the right guy" or Dakota & Chris start a family?

Let me know what you think below or on my Author Facebook: www.facebook.com/authorjmnorthup